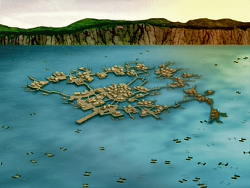 Jang Hui is a small fishing village situated in one of the outer islands of the Fire Nation. Located on the Jang Hui River, from which it takes its name, this unique settlement is made up of houseboats and buildings on stilts, connected by bridges and planks.

Jang Hui is situated on a wide area of the Jang Hui River. The waterway is bounded on both sides by small, gently inclined cliffs consisting of gray rock. At the foot of a cliff is a small dock made from wooden planks and bamboo stalks bound together with rope. Wooden skiffs are often moored here, and these watercraft provide access to the village. The settlement itself is built atop numerous wooden platforms, all of which are connected to other platforms by bridges. Walkways are constructed from wooden boards of varying length, though some bridges have planks of uniform size that span the width of the passage. Beneath the platforms are wooden support beams that extend down to the riverbed.

Much of Jang Hui's infrastructure is poor and underdeveloped, as most buildings are made from material such as wood, bamboo, and straw. Stilt housing facilities are commonplace, and such structures are typically elevated higher than surrounding buildings. Nevertheless, they exhibit many similar features, such as wooden floors, bamboo poles, and slanted roofs made from yellow straw. Many of Jang Hui's structures have limited wall space, though pile dwellings have none and are completely open to the air. One example of such an establishment is the village hospital. Furthermore, there is a ferry to take visitors and locals to and from the town and a small fish market in Jang Hui. This building resembles the ones near it, but is larger and decorated with a shark's jaw bone for aesthetics. Unlike the store, most houses exhibit overhangs and porches. After Katara masqueraded as the Painted Lady each night to assist the villagers, a statue of the spirit was erected at the center of the settlement.

Riverboats are used frequently in Jang Hui, and as such, the village features many large docks. However, not all residents berth their boats at a dock, instead preferring to leave them near their house. A wooden watchtower is located near one of the docks, and this is by far the tallest structure in Jang Hui. It is open to the air and has several floors, all of which are accessible with a ladder.

Retrieved from "https://avatar-destiny.fandom.com/wiki/Jang_Hui?oldid=4145"
Community content is available under CC-BY-SA unless otherwise noted.