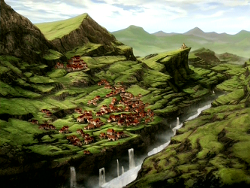 Shu Jing is a town located on one of the eastern islands of the Fire Nation. Situated on a cliff that houses a system of waterfalls, it is one of the many small, peaceful settlements tucked away throughout the Fire Nation islands.

Shu Jing and the region that surrounds it is a renowned haven of pristine natural beauty and wildlife. The town is located at the heart of a vast expanse of grassy hills, most of which are rocky and steep in terrain. Due to the rough surface of the land, trees are only sporadically found in the area. Shu Jing itself is situated at the edge of a canyon, through which flows a small river. Though narrow, multiple waterfalls and cataracts dot the canyon, where the rock is black in coloration.

The town itself is located on the slope of a hill. Its architectural styles are similar to that of many other rural Fire Nation towns. The buildings are mainly low-rise and red or white in exterior coloration, with golden trimmings. They have slanted roofs, a few windows, and entryways at their facades. The structures closest to the canyon are simple in design, but buildings further away exhibit more extravagance and grandeur. These are typically two to three stories tall, towering in comparison to the smaller ones. All buildings are made of stone and have wooden roofs. Certain public facilities, such as restaurants, have spacious balconies that overlook the valley, providing sweeping scenery.

Retrieved from "https://avatar-destiny.fandom.com/wiki/Shu_Jing?oldid=4147"
Community content is available under CC-BY-SA unless otherwise noted.